Cbd oil for hyperthyroidism in cats

Hyperthyroidism is a fairly common condition among household cats, with approximately 12% of animals being affected with the condition. It is a fundamental dysfunction of the thyroid gland found in your cat’s neck. This organ is crucial to the overall function of your cat’s body and releases various hormones that help them function. There are a number of conventional therapies that can help manage the symptoms associated with the disease, though there is no known cure at the present time. You may have heard of cat owners talking about CBD oil. Let’s take a deeper look at what hyperthyroidism is and what CBD actually does.

What is Hyperthyroidism in Cats?

The thyroid is a type of gland in the mammalian body. In fact, all vertebrates have a thyroid gland. These glands are responsible for releasing chemical compounds known as hormones. Collectively, this entire system of glands and hormones make up the endocrine system. This system is responsible for controlling a wide variety of functions in the cat’s body, including growth, metabolism, and development.

Thyroid and the Endocrine System

Let’s take a step back for a moment and consider the endocrine system as a whole. It is defined as a collection of glands spread throughout the body that is responsible for the production and secretion of hormones that control a wide variety of physiological processes. These physiological processes are as follows:

The thyroid is not the only gland in the endocrine system. In fact, there are multiple glands, including the hypothalamus, pituitary gland, adrenal glands, pineal body, and the pancreas. There are even a set of 4 tiny glands located around the perimeter of the thyroid known as the parathyroid glands. They are responsible for controlling the levels of calcium in the mammalian body to keep the skeleton strong and healthy.

In other words, the thyroid is not the lone component of some singular system in your cat’s body. Rather, it is part of a wider system that controls a wide array of functions in the mammalian body. The primary building blocks of this wider system are the various glands of the endocrine system. Consequently, if one gland is not functioning properly, then the entire system can go out of whack and create the potential for failure.

Hyperthyroidism or “overactive thyroid” is when your cat’s thyroid gland releases too much T3 and T4 into their blood. This can result in a serious imbalance in other hormones and overall dysfunction in the endocrine system. This is because the pituitary gland actually controls the thyroid and the levels of T3 and T4 present in the blood.

If the levels drop too low, then the pituitary gland will release thyroid-stimulating hormone (TSH) to kick start the thyroid gland back into production. This becomes an ongoing problem since the system is malfunctioning it produces too much T3 and T4 which, in turn, makes the system continue to malfunction or can escalate the problem.

What are the Symptoms of Hyperthyroidism in Cats?

The signs and symptoms of feline hyperthyroidism can range from the fairly benign to the totally debilitating. They include:

The first three are the most common, though in cases where the disease has progressed to a serious level the other symptoms may also be noticeable. Because these symptoms are fairly common to a variety of conditions, it may sometimes be tricky to diagnose the hyperthyroidism in cats. 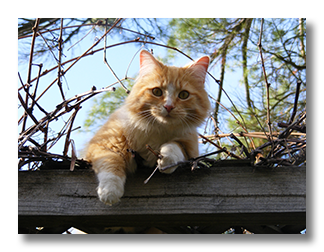 Any suspicion of hyperthyroidism will begin with a physical examination of your cat’ neck to determine if the thyroid gland is swollen or larger than normal.

When at the vet they may check the blood pressure and heart rate of your cat. If the initial examination shows any abnormalities, then the veterinarian will likely order a test to determine if your cat has elevated T4 levels in their blood. This is the most obvious sign that they are suffering from hyperthyroidism.

There is a small percentage of cats, however, who suffer from the disease but do not exhibit the telltale sign of elevating T4 levels. In these rare cases, there are more sensitive and complex tests that they can perform to make the final diagnosis.

As with any disease, there is a range of severity for the disorder. What makes hyperthyroidism unique, however, is the fact that T3 and T4 hormones are so vital to so many different functions of the mammalian body.

Furthermore, the disease can occur in any breed of cat and is equally prevalent amongst males and females. It does, however, happen much more frequently in older cats. In fact, approximately 6% of total cases occur in those cats less than 10 years old.

What are the Treatment Options for Hyperthyroidism in Cats?

There are three main treatments of hyperthyroidism in cats:

The oral administration of an anti-thyroid medication known as methimazole (also known under the brand name Tapazole). It is effective and usually generates results in 2 to 3 weeks, though there is a significant chance of your cat developing side effects, including loss of appetite, fatigue, lethargy, vomiting, and, in rare cases, abnormalities in their blood cells.

There is also the possibility that more serious side effects, such as blood clotting or liver damage, may occur. Because the condition is not curable, the cat will have to take the medication for the rest of their life and regularly undergo CBC testing to determine their TSH, T3, T4, and thyroid antibody levels.

If the condition is caused by the presence of a benign tumor known as a thyroid adenoma, usually present on both halves of the gland, then it is possible to have either the tumor or the entire thyroid surgically excised. This frequently results in curing the condition but is dependent on the fact that the underlying reason for the hyperthyroidism is the presence of benign tumors.

As you can see, these various treatment options have their specific risks and limitations. But there are however natural alternatives such as changing your cat’s diet or food brand. You may have also heard about pet owners using CBD, but what does it actually do?

CBD oil comes from the hemp plant. People have been using CBD for both humans and animals. It belongs to the group of chemical compounds known as cannabinoids.

You may have heard of THC, which some consider it the most popular cannabinoid. However, CBD is different than its cannabinoid cousin tetrahydrocannabinol (THC). CBD is not psychoactive and generally may have only minor side effects, meaning it will not make you or your cat feel high. On the other hand, THC will get your cat high, as it is psychoactive. CBD is preferable for many cat owners, as any psychoactive substance may not be tolerated by cats ingestion of THC may result in confusion and aggravation for the feline.

How Cannabinoids Work With The ECS

The ECS is a communication and regulatory system that is made up of endocannabinoids and cannabinoid receptors. These receptors are located all over the mammalian body and the ECS can is responsible for regulating them. Several functions of the ECS include regulating sleep, pain, mood, appetite, hormones, and immune responses. CBD, being a cannabinoid, may increase your body’s natural levels of cannabinoids (also referred to as endocannabinoids).

You may have heard of how CBD is being used to soothe inflamed skin. It may also have a calming effect, which can help if you are feeling discomfort ot irritation.

CBD’s versatility and adaptability are its greatest strengths. There are many CBD products available which are made specifically for cats. For example, cat treats containing CBD oil are quite popular. 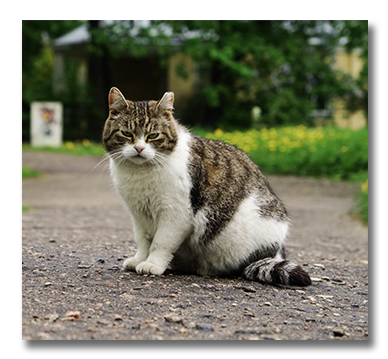 Can You Use CBD for Hyperthyroidism in Cats?

In short, CBD is not yet approved or meant to prevent, treat, or cure any ailments or diseases.

We do know, however, that CBD interacts with the ECS.

The ECS is responsible for regulating a variety of functions in your cat’s body, including metabolism, mood, growth, and immune system function. In fact, there is considerable overlap between the functions of the ECS and the endocrine system.

There are large amounts of cannabinoid receptors present in both systems, most significantly:

Furthermore, due to the abundant presence of CB-1 receptors in both the brain and the thyroid, their modulation plays an active role in creating a well-functioning and healthy thyroid.

CBD may promote an overall state of wellness known as homeostasis. In other words, it may help keep the body balanced.

Is CBD Oil Safe for Cats?

There is the potential for a few minor side effects, including:

All of these side effects are fairly uncommon and most cats will not exhibit them. According to the World Health Organization (WHO) ” CBD has been found to have relatively low toxicity”. However, as with any medicinal supplement, it is best taken under the supervision of a clinician. In the case of your cat, it is best to work with their veterinarian to ensure that does not have any negative interactions with other medications they may be taking.

This will also ensure that proper dosage amounts are given to your cat. Remember that the condition has no cure at the current time, so you are responsible for consulting with your vet regarding possible treatment options. For more information on a cat’s correct dosage portion check out our easy to use dosing chart here.

Categories: Cbd for felines cats, Cbd for petsBy adminDecember 22, 2019Leave a comment
Tags: CatsCbdHyperthyroidismIndiaMedicationMedicineOilOnlinePainPetsRelief
Share This Article
Share with FacebookShare with TwitterShare with Google+Share with PinterestShare with LinkedIn